Military parades in North Korea are held in the capital Pyongyang, every half decade, decade and during jubilee years. The 10th of October parade in particular revealed a wide variety of intercontinental ballistic missiles which have been widely covered, military vehicles, personal equipment, as well as new types of small arms, many of which seem to be in the hands of special units of the KPA. A cornucopia of rifles, sub machine guns and squad automatic weapons were shown in the hands of troops. Here we will be focusing on the new firearms publicly presented in the parade, as well as the attachments found on these weapons.

Handguns are holstered and hard to identify in the parade, though the Baekdusan CZ-75 copies from previous shows are likely kept in closed holsters of some service members. Below are some KPA special forces troops who seem to have two new different types of handguns.

Some of these rifles are familiar sights, such as the Type 88 seen in the hands of these soldiers. Its distinctive fixed stock, ribbed handguard, and GP-30-style grenade launcher as seen in previous parades are shown in the same configuration.

These particular Type 88s have been unchanged since the previous military parades held, as seen in this photo from a parade 3 years ago in 2017.

Certain Type 88-1s with side folding stocks were also featured in the hands of soldiers.

Some of these Type 88s are seen in more sophisticated configurations. Above is a Type 88 with what appears to be a night vision scope mounted via a side rail slot as one would see on Russian AKs, a suppressor, and the distinctive 5.45 x 39mm helical magazine which have been employed by certain KPA units.

Of all the Type 88 variants seen in the parade, the rifles held by the Multicam wearing special forces troops are the most striking. These have the underbarrel “GP-30” and sound suppressor, but features a picatinny railed dust cover with a magnified scope and a collapsible stock. The collapsible stock means that these Type 88s likely have an AR style buffer tube, not seen on any North Korean rifles prior.

Bullpup variants of the Type 88 have also been revealed at the 10th October parade. This rifle has a vertical grip, a suppressor, weapon mounted light and a scope which is coupled with a picatinny attachment on the carry handle. It seems as though these bullpup rifles are seen in the hands of this unit with digital blue uniforms, so they’re likely a naval infantry unit.

As shown in previous displays, the Type 98-1 makes another entrance, with its shortened barrel and AK-105 profile 90 degree gas block. Loaded below is a helical magazine, and a clear shot of the sound suppressor seen on other rifles in the parade. The suppressor features 4 rings cut out in the middle, likely to promote better heat distribution from the increased surface area, and tapers towards the front. Because these units have riot helmets and black uniforms, these may be a gendarmerie style unit meant to deal with domestic threats.

Type 98-1s also received updates to it as well. Much like the modified Type 88s these special forces soldiers are wielding, these Type 98-1 rifles were updated with a collapsible stock, railed dust cover with scope, and a weapon-mounted light.

These modified Type 98-1s are also seen fitted with side mounted NVG scopes, helical magazines, a muzzle brake and interestingly, an AKM-S style folding stocks as seen on their Type 68s. Whether or not the firearms manufacturers are attempting to use remaining stocks, or the setup is being experimented with is unknown.

A closeup of the muzzle brake seen on Type 88s and 98s. Note the conical shape of the front reminiscent of an AKS-74u muzzle device made larger.

Of note is the RPK-74 patterned automatic rifles seen in the hands of KPA squad gunners. These squad automatic weapons were publicly documented in the 2017 parade and remain largely unchanged. However, the previous RPKs had side folding AKS-74 stocks similar to the Type 88s, and the ones in the October 10th parade were configured with AKM-S style under folder stocks. Both the underfolding and side folding RPKs resemble Arsenal’s LMG-F models. 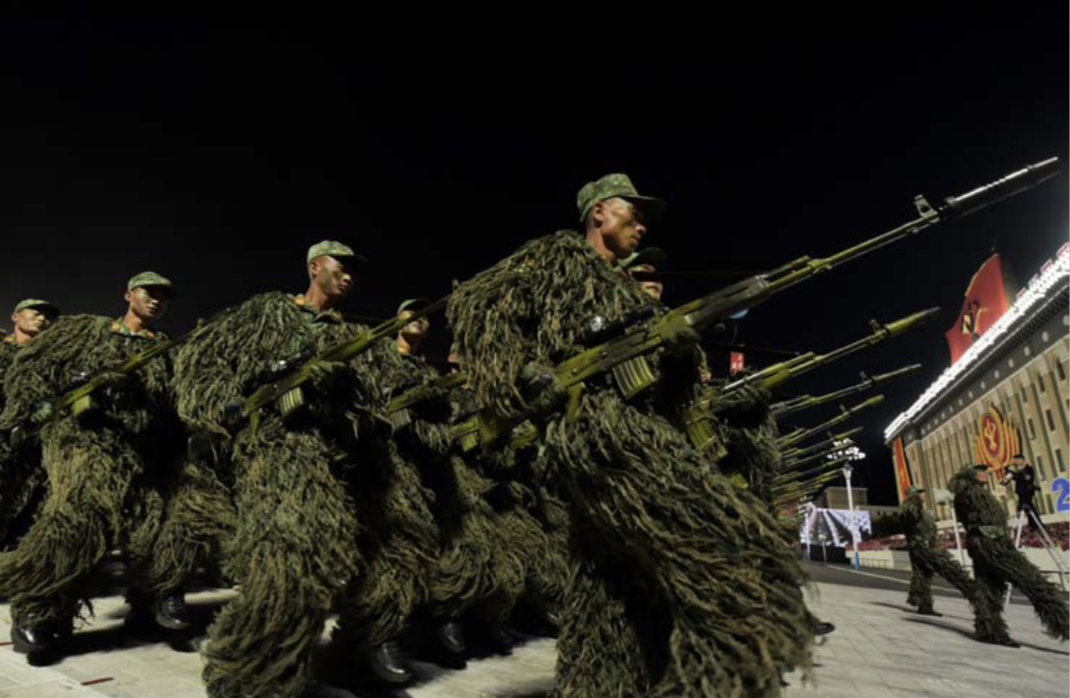 Marksmen wielded the Chogyok-Pochong sniper rifle, a copy of the Yugoslavian M76 which has been a mainstay for KPA marksmen. These have remained largely unchanged save for the tapered suppressor seen on other rifles.

While making only a brief appearance, Vz.61 Skorpion-type SMG’s accompany some soldiers on parade. These are either locally modified Czech Skorpions or an indigenous copy altogether since the stock and barrel are lengthened, with the latter being likely. Lengthened barrels and stocks make the Skorpion-type SMG’s easy to hold at port ready during parades, so the modification was ostensibly made for this purpose.

This PP-19-01 Vityaz copy is one of the more intriguing small arm debuted in the parade. Much like the Russian Vityaz, it features a 90 degree gas block and a small magwell for the pistol caliber magazines. In contrast to the Vityaz’s magazine which is curved, the KPA’s copy has straight magazines. Accessories include what looks to be a red dot sight added via a side rail mount, a laser unit and flashlight mounted on the handguard’s rails, and a suppressor which is identical to the Izhmash made Vityaz sound suppressor. 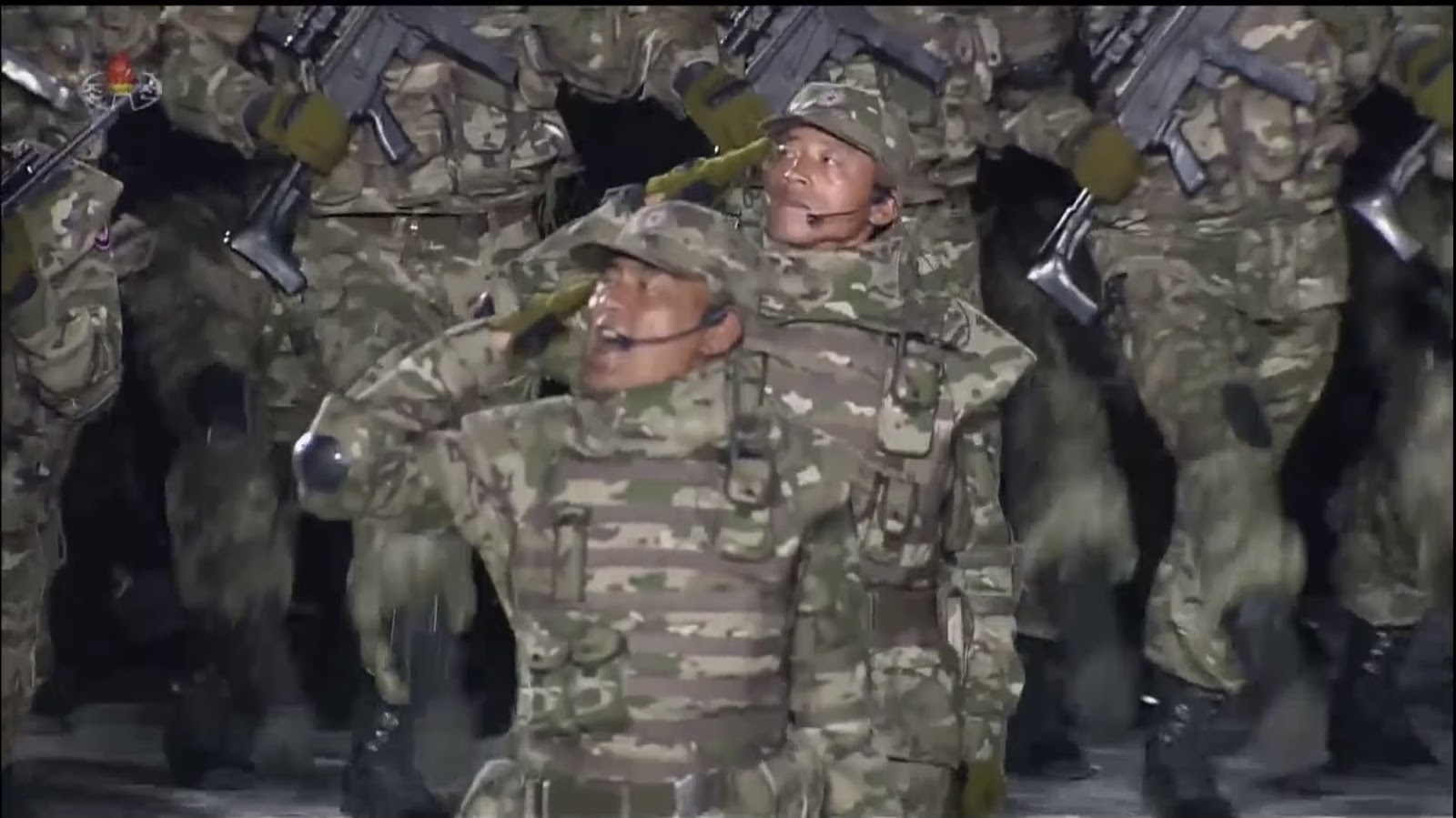 RPG-7 copies, which have been in KPA arsenals for some time also appear in the parade as well.