North Korea’s status as a sequestered and introverted nation means information on the Korean People’s Army such as on its equipment and manpower is often left unknown or hard to ascertain. North Korea has a “Military First” policy, which means the bulk of the country’s resources goes into the manning and development of the Korean People’s Army. Weapons, from their Type 88 AK-74 style rifles to their intercontinental ballistic missiles, are produced natively, with many of the small arms reflecting the past alliances with countries such as the former Soviet Union as seen with their AK-47 and AK-74 copies and Baekdusan CZ-75 handguns which were of Czech origin.

Currently, the only country that has a more overt relationship with North Korea is China. Russia, Iran, and Syria also have interactions with North Korea, though more covert and clandestine channels. These two neighboring countries signed a mutual aid treaty in 1961, outlasting the former Soviet mutual aid treaty signed just a few days prior in Moscow by Kim-Il Sung. Because of this treaty, China provides imported goods that enter North Korea such as fuel and North Korea exports coal to the PRC. Despite the rather amicable relations and a clause in the treaty requiring Beijing to defend Pyongyang in the event of an attack, China does not send military aid to North Korea.

These North Korean border guard uniforms appeared on western media outlets around 2017 and are presumed to be brought into North Korean service around that time. Upon closer inspection, it is clear that this is a variant of DPM. Disruptive Pattern Material was developed by the British in the early 1960s and was mass issued to the British military in the latter part of the decade. This camouflage pattern consists of green, black, and brown asymmetrical strokes on a tan or khaki background. Stippling, the little splotches on the pattern, are a transient trait, as the inspiration for this camouflage came from hand-painted denison smocks used by paratroopers during the Second World War which naturally left little paint specks on the smock.

Since then, a wide variety of nations around the world have adopted their own variants, whether in the present day or at some point in their respective military history. Oman uses a unique red dominant DPM pattern for use in their sparse deserts, the Netherlands also adopted a form DPM as their standard army uniform. Indonesia also issues its own DPM uniform as standard issue for their army branch. Note that the latter two variants went away with stippling on their DPM copies.

The Philippines also adopted its own copy of British DPM in the early 90s, which is where the story of North Korea’s DPM uniforms began. Much like the Indonesian DPM, it is far greener dominant to account for equatorial environments and lacks the stippling found on British DPM.

From the early 1990s until today, the Philippine Army utilizes a British DPM copy, with minute variations in color and prints over the years, though Philippine DPM is always far darker than its British counterpart, having darker shades to suit the Philippines’ lush jungle environments better. A majority of the uniforms and fabric are locally produced, however, during the early 2000s, Chinese uniform manufacturers were contracted to produce some uniforms to bolster the supply of available.

China’s Special Forces subsequently adopted a DPM variant, which is virtually identical to Filipino DPM. These uniforms first appeared in 2004 and are colloquially known as “Hunter”, due to being first debuted in the 2004 Special Forces Hunter Exercise. These uniforms were PLA Special Forces issued until 2006 when it was discontinued, and in 2007 replaced by the Type 07 digital uniforms which are currently standard issue for the entire Chinese armed forces.

Despite being stricken from further PLA usage, Filipino DPM uniforms continue to see production in China, as seen in Alibaba. Nowadays, a vast majority of Philippine Army DPM uniforms and fabrics are manufactured locally, which mostly eliminates the need to supply troops with imported uniforms, but at least some Filipino DPM uniforms are of Chinese manufacture. It is highly likely that, because of China’s fairly amicable relations with North Korea, some of these DPM fabrics were imported for the Korean People’s Army.

Western media outlets in 2017 revealed a familiar Disruptive Pattern Material pattern being worn by Korean People’s Army border guards. A couple of key distinctive traits conclusively prove that the fabric was imported from mainland China. First, is the color. Its color scheme is the same as that used of the PLA Hunter DPM uniforms, which by proxy is the same as Filipino DPM. Its green shades are very dark, and the reddish-brown, almost ochre brown shades are a telltale sign of Filipino and Chinese DPM. The asymmetrical shapes of each color palette are the same size and consistency of Hunter and Philippine DPM as well.

While domestic use of DPM ceased with the Chinese armed forces, Filipino DPM fabric and uniforms are still produced in China. Logically, the companies with stocks of these fabrics would want to offload them, and selling to North Korea seems a logical choice to do so.

Finally, the fact that the two neighboring countries are the only ones who have agreed to conduct economic trade means that the importation of Chinese camouflage fabric would be quite feasible to arrange. Interestingly enough, rare and sought after North Korean uniforms will occasionally appear on TaoBao, China’s hybridized eBay/Amazon site, again indicating that some North Korean uniforms are sent to or made in China as well, even if brought in via private, individual traders. This implies that the two countries are porous enough to at least allow military attire to flow between their borders.

It is unknown for sure whether the uniforms are produced in China, or made in North Korea using imported fabrics. As mentioned previously, some North Korean uniforms will make it on the Chinese market, some as bringbacks but most others as North Korean contract Chinese-made uniforms. Because none of these DPM uniforms have been found for sale in Chinese markets, it is fair to conclude that fabrics are brought in to be made into uniforms for the KPA.

Possibly the most compelling aspect of this camouflage is the fact that it spanned many countries before finding itself in the hands of North Korean troops. DPM was an originally  British design, which ended up being copied by the Filipinos, then was replicated and tested by the Chinese, before exporting some to North Korea. Its journey spanning many continents and countries before ending up in North Korean use is colorful, to say the least. 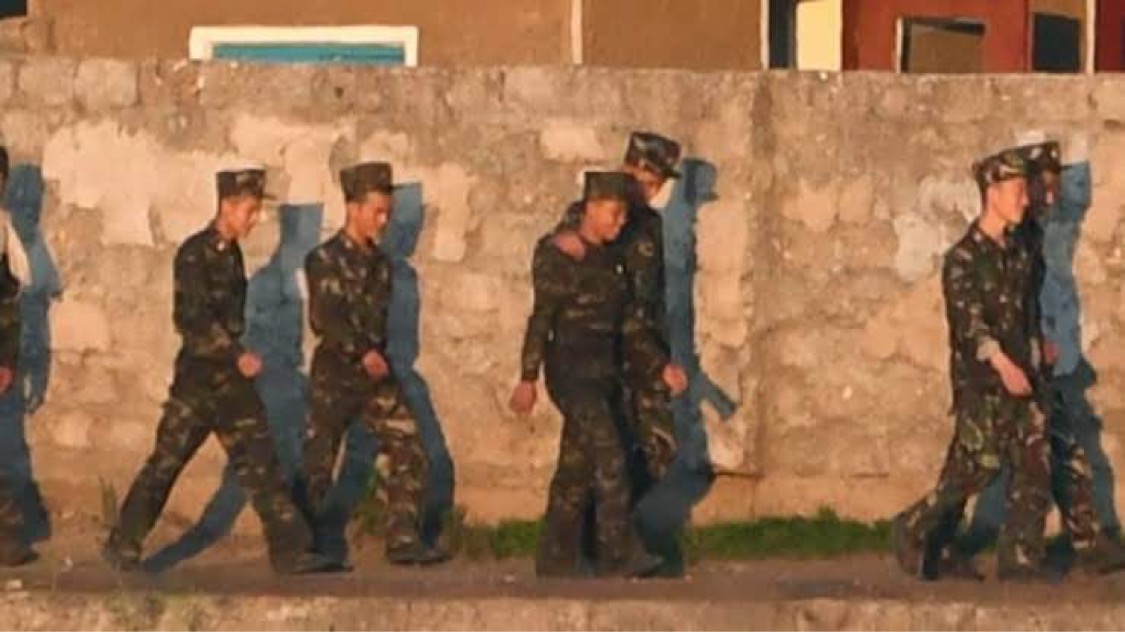 Needless to say, one could be compelled to see how much more uniforms will be imported from China to North Korea, as the North Koreans produce a vast majority of their military equipment, gear and uniforms indigenously. In any case, KPA border guards will likely continue to service their storied and provenance rich DPM uniforms for quite some time, as this implies that North Korea will continue to import organizational clothing from China for its troops.

A collector modifying a Philippine BDU to resemble a KPA uniform (Roi, FET)

Special thanks to Lluis, Roi, and Brandon of Far East Tactical for helping with this article.