Over the course of the Syrian Civil War, the YPG and wider SDF have always lacked armor. Whether it be a tank or an armored car, all have been in short supply, and only special units were awarded the privilege of an up-armored tractor or one of the extremely rare captured vehicles. Of course, under the Trump administration, the SDF were able to get hundreds of lightly armored vehicles such as humvees, Bearcats, and Maxxpros, and in early 2017 received small numbers of IAG Guardians provided for the Raqqa Offensive. But before this, actual standard armored vehicles only numbered in the double digits. With the vast majority of captures being old, rundown vehicles being captured from Daesh who had captured them from another party, parts were also in short supply. The YPG needed to fill their armor gap.

Many have seen the abominations of steel that have come from Kurdish workshops. These up-armored tractors and garbage trucks served their purpose – though mediocre – and provided an armored taxi service as well as being able to lay down supportive fire. However, in the grand scheme of things they were rather attractive targets and a great many men and women perished when anti-armor units destroyed them.

The YPG, however, are great innovators, and were testing many different armored combinations. The one that will be talked about here today will be the up-armored pickup truck. This variant of up-armored car was designed to be a battle taxi. Zipping across open ground to drop off fighters or pick up a wounded comrade. An up-armored car using a heavy machine gun first saw action around Kobane in 2014 according to a long-time fighter, but could have been designed even earlier. And an old video posted by the YPG’s Media Center confirms their presence in the field around this time. These early versions of armored cars would be the forerunners of the semi-standardized land cruiser. 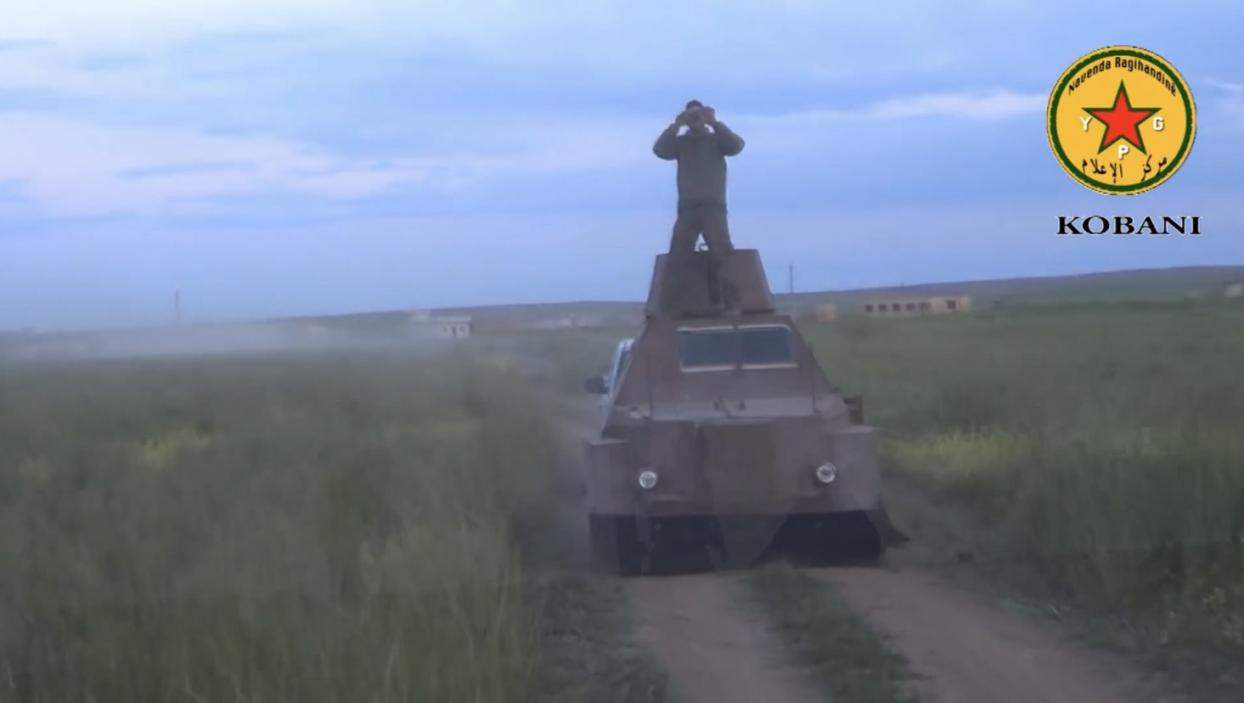 The YPG’s armored pickup is different from other technicals in Syria as it is a total conversion of the truck, turning it into an armored car with an enclosed bed and gunner position. Unlike the troop transports made by Daesh and later Hayat Tahrir al-Sham, the YPG’s vehicles were not as expendable. While primarily battle taxis, their heavy machine gun mount meant that they often served in a fire support role. They were especially helpful in the countryside where their mobility meant they could easily zip around without being easily put out of combat by a semi-competent RPG-gunner. Oftentimes based off the Toyota Land Cruiser, the vehicle is lightly armored, only being able to stop rifle rounds, though several interviewees testify that the vehicles were rather durable and sometimes surprising in what they deflected. This comes down to the non-standard manufacturing. Though later in the war there was more standardization, in truth the majority of these vehicles had different amounts of armor on them, with a commonality being bullet-proof glass. With some being able to stop 7.62x39mm and below, while some had sections on their armor that occasionally deflected 12.7x108mm (though this is hearsay and rather doubtable). Nevertheless, the vehicles were designed with the goal to deflect light arms. And they were very fast. Traveling at over 100kph (~60mph) off-road in some cases. But the vehicles were often bumpy, muggy, and cramped. Poor ventilation meant that those who sat in the back (the few who could fit in, often not more than 4) were subjected to high temperatures and car fumes. Later versions improved on this, and it’s likely that without an influx of American vehicles these updated variants would have been mass-produced to the extent that the SDF is capable.

Armament of these armored cars was pretty standard of armored cars. The YPG hooked up PKMs and DShKs on top of the vehicles in turrets that spun in a full circle. Additional ammunition was carried in the vehicle. There were no optics on the machine guns or in the turrets and sight was limited, which also made the fire support limited as well. The main usage of these guns was to suppress, not to provide accurate fire support. During the battles of Manbij and Raqqa these armored cars saw frequent usage.

By this point the YPG had produced dozens of the vehicles. Both in Kobane, where the main facility was located, and to a much smaller extent in Derik. Manbij was one of the most intensive fights the SDF had faced up until that point outside of Kobane. The highly strategic city was filled with foreign fighters and was stocked full of ammunition. The fighters there were often better-equipped than the SDF, better trained, and much more ideologically radical. The nature of the fighting meant that daily there were dozens of casualties while fighting for the city. Many of those casualties were evacuated by these armored cars to field hospitals behind the lines that saved their lives. Yet Manbij would be a serious reckoning for these vehicles, with many being damaged and destroyed. It was after Manbij and in the leadup to Raqqa where the Coalition started dropping actual milspec armored vehicles on the SDF. As a result of this, these armored cars were pushed to the side as a humvee does exactly the same thing except better. The SDF often treated the humvee as a clown car, with several former and current members of the SDF testifying that they saw nearly a dozen men squeezed into one of these vehicles on multiple occasions.

Of course, this did not mean the vehicles were scrapped. The armored cars of the YPG and SDF saw combat in the advance to Raqqa and beyond. They were used in their same role in Raqqa as an armored battle taxi/ambulance.

In 2018, an up-armored Land Cruiser was used in the SDF offensive to take Dashisha.

Afterwards, in 2019 one was spotted in Baghuz with the Manbij Military Council.

And as recently as the summer of 2020 one was spotted in anti-terror operations in Southern Hasakah.

These vehicles, though now obsolete, will remain in SDF arsenals for the foreseeable future. The SDF still has a need for armored vehicles, and their use as a quickly moving armored platform serves well in low-intensity operations against fighters who are unlikely to have much in the way of anti-armor capabilities aside from IEDs.